The Junior A grade girls tennis team from Macleans College played against St Kentigern’s on Saturday the 22nd September, in a battle for 1st place in the Auckland championship. 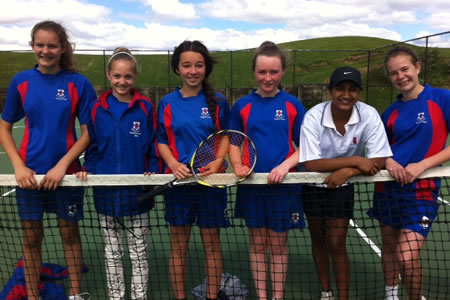 While their rivals St Kentigern’s proved too strong, the Macleans team fought hard and displayed some tremendous tennis skills. Being in the final itself is a tremendous achievement for Macleans College, and the team consists of very talented and promising players. They are sure to be strong contenders in the future and a team to watch out for.

Over the course of the tennis season, which began in February earlier this year, the Junior A girls beat several other schools and gained valuable points against teams from St Cuthbert’s, Epsom Girls’ Grammar, Diocesan and Baradene, to make it into the playoffs for first and second place. While all of the players in the team have contributed hugely to their success, the stand out players have to be Pranika Arisht and Kristen de Wet, both in year 9. The girls deserve their success this season because they have trained and played all year with spirit and commitment.