Last week’s formal school assembly on the 21st of September was an emotional one as the Macleans College school prefect body was announced. 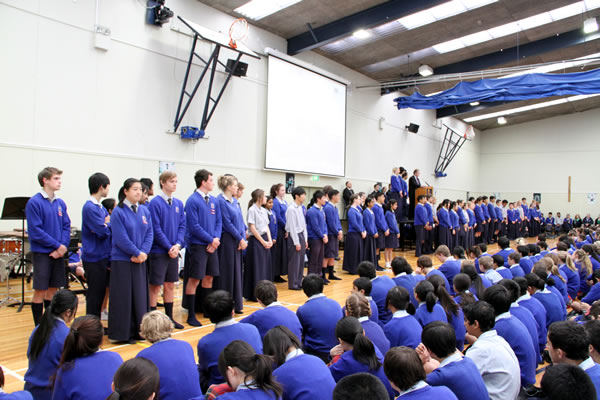 It was a time of excitement and anticipation for the 66 school prefects that were announced for 2013, including 16 house captains and the four head prefects. For the 85 current prefects it was a time of sadness for some and relief for others as these announcements brought a realisation that their time at Macleans is nearly over and that a new student body will soon replace them.

“I’m really honoured to be selected for deputy head boy and so excited for next year!” Frank said on receiving his new position.

Mariam Al-Jawad, Macleans College head girl 2012, had advice for the future head prefects. “You’ll all be surrounded by really talented and amazing people, so take the time to learn about them, and learn from them. You’ll be amazed at how close you grow to them and how much you will gain!”

In addition, Blaise Clotworthy head boy of 2012 said that, “it is not necessarily about what you have done to be elected, but how you will make a positive contribution as the leaders of the school.”

The school prefects act as not only role models and ambassadors for Macleans College but they, guided by Mrs Irving, are responsible for the smooth running of various activities within the school. These include the school ball, graduation dinner, talent quest, year 13 leaver’s projects, the annual Easter egg hunt and community services. A school prefect is a highly prestigious leadership position at Macleans College. These students have undoubtedly proved themselves as great leaders within the school and will further develop these qualities in the coming year.