This year’s Gala Concert, a collection of different performances from top cultural groups, was a spectacle to behold.

Audiences were enthralled by an array of music, song and dance – applauding respectfully at the talent on display at the Holy Trinity Cathedral in Parnell. Many performances came from co-curricular groups that were champions in their fields.

The group performances included the symphony orchestra, the Dolce barbershop quartet, the school choir, the ManUp trio, the Stage Challenge dance group, the senior concert band, the MacApella barbershop chorus, the jazz band, and the winners of the small house choir competition, Snell house. It was said that there were over 250 students participating.

Solo displays were dotted in between the group performances. An intense clarinet solo from Jay Shen, an interestingly comedic vocal solo from Ben Kubiak and a sombre rendition of “Somewhere” from West Side Story by Teresa Wojtowicz kept the night fresh and exciting. Similarly, Mr Weeks put on his comedic side for the large audience, keeping them happy and interested while the stage crew scurried to set up.

Finally for the surprise act – a medley of all the most memorable songs from this year’s acclaimed musical production, Les Miserables. The audience responded with an uproar of applause and a standing ovation. All in all, the night was a magical demonstration of Macleans’ commitment towards music and dance. 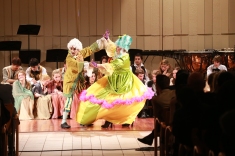 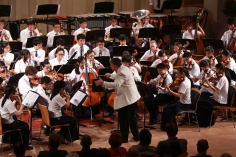