Lianne: So you have just had an incredible cheerleading experience! Where did you go and what did you have to do?

Danon: I went to Florida for 16 days to compete in the Cheerleading Worlds. Before Worlds, we attended a competition called Cheerleading of America (COA) where we placed 4th. We stayed in the Disney resort where we had to train every day, sometimes up to 4 times, to get our team in the best shape to compete. The competition was for 2 days. If we qualified into the top 30 (which we managed to, luckily) we would be able compete the second day! 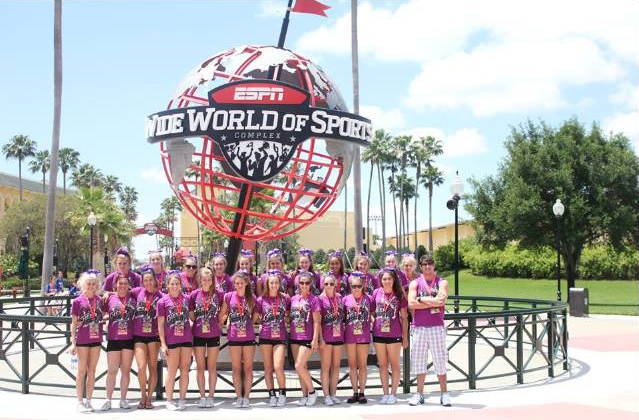 Lianne: What was the best part about the whole experience?

Danon: Meeting new people and having the opportunity to compete at Worlds.

Lianne: What place did your team receive?

Danon: Our team, Queens from Cheer Dynamix, placed 10th out of over 100 teams. The first day we qualified into the top 30 so we made it through to the second day.

Lianne: How long have you been doing cheerleading and how did you get into it?

Danon: I joined cheerleading in 2010, after I quit gymnastics, for a club called Total Cheerleading.  But when our club had to close down later on, I decided to stop.  It was really far away and there were other reasons too.  I joined again this year for a club called Cheer Dynamix, so training myself up to be good enough for the Worlds’ floor was quite hard as I only had a few months, but it was very worth it.

Lianne: What advice would you give to other people wanting to try and gain the same experience you did?

Danon: If it’s not for Cheerleading and you just want to go far in your sport, practise is really the main thing that I could say. Just being committed to the sport you play and having the right attitude will help you to push yourself to be the best you can be.

Lianne: How can others get involved?

Danon: You can talk to the manager at Cheer Dynamix and what then you will get assessed and put into a team.  Everyone gets into a team.

Lianne: Did you make any mistakes during your performance? Is there anything you would change if you could go back and do it again?

Danon: One of our team members injured herself really badly on the second day and busted her knee.  She fell to the floor during the performance and the music stopped.  We were all sent off the floor and told that we had 30 minutes to re-arrange the routine so that she wasn’t in it.  We were lucky as we had another opportunity but it was incredibly hard and stressful to re-arrange the routine. I didn’t make any mistakes individually, but as a team we had a few falls.  I wouldn’t go back and change the falls as it’s a part of the learning and it was a good experience to show that despite the mistakes that are made, you can still do well.